Euchre Quiz – What Should You Discard? 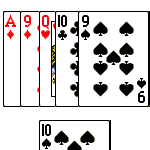 You are the dealer, and the player to your left told you to pick up the

What Should You Discard?

For obvious reasons, no one should have discarded the Ace or the Trump card. The 9

can be eliminated from consideration, because it doesn’t create a void in diamonds.

So there are really only two choices, the Q

. Many of you would have picked the 10

because it the smallest card that creates a void. Discarding the 10

is not a mistake, but it is a dubious move. The better play would be to discard the Q

is alone, she can’t be used effectively as a squeeze card, therefore making her is a equally as useless as the 10

. The only difference between the two cards is that the 10

is in the next suit, and Q 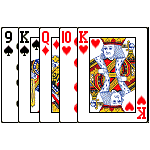 Euchre Quiz – What Should You Lead?